Benjamin Campbell, Campbell's founder, came west in 1846 with his family. His father, William, is noted for having surveyed the cities of San Jose and Santa Clara, and for starting a sawmill near the town of Saratoga. In 1851, Benjamin Campbell bought 160 acres and planted it with hay and grain. This acreage later became Campbell's historical downtown core.

1878
In 1878, Mr. Campbell sold an acre of his land for $5 to the railroad and by 1887 the first subdivision was recorded west of the railroad from Campbell Avenue to the spot where the Water Tower Plaza now stands. The area became the center for shipping fruit, and within a short period of time, the drying grounds and canneries made Campbell an important rail center. The Campbell Fruit Growers' Union became a well known cooperative with its 17-acre drying yard. 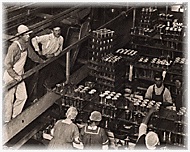 Canneries
There were three major canneries in Campbell such as the J.C. Ainsley Packing Company, Hyde Cannery, and Payne Cannery. Most of the output of high quality fruit from the Ainsley Cannery was shipped to England. Ainsley Park, located between Harrison and the railroad tracks, commemorates the man and his cannery. Of special interest in the park are two giant black walnut trees that were planted by the Swope family, descendants of Benjamin Campbell.

President Theodore Roosevelt
President Theodore Roosevelt visited Campbell in 1903. He came at the request of Professor J. Fred Smith, the first principal of Campbell Union High School. While here, President Roosevelt planted a redwood tree on the school grounds. The Campbell Union High School closed its doors in 1980 and now serves as a community center, providing a meeting place for a variety of clubs and organizations. 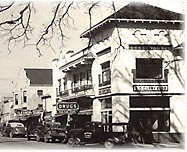 Campbell's Official Incorporation
Campbell was officially incorporated as a city in 1952. City offices occupied several buildings, such as Fire House No. 1 and the old Congregational Church, before the official City Hall was built. Campbell has grown from a small farming community with a population of approximately 5,000 to a progressive community with a population of over 38,000.
Agenda Center
Employment
Report a Concern
Recreation Activities
Public Notices
Meeting webcasts
Bids & Proposals
FAQs
Next Previous