The City of Campbell has changed the way that City Councilmembers are elected. Previously, all five Councilmembers were elected at-large, meaning that all registered voters who lived in the City of Campbell had the opportunity to vote for all five City Council positions. Under the new district-based election system all five Councilmembers will be elected by district, this means that Councilmembers will be required to live in the district they represent and will be elected only by the registered voters of that district. The sequencing of the district elections has been determined and, in the November 2020, General Election seats for districts one and two will be on the ballot; in November of 2022 the seats for districts three, four and five will be on the ballot. The final adopted map with all five district boundaries is shown below. 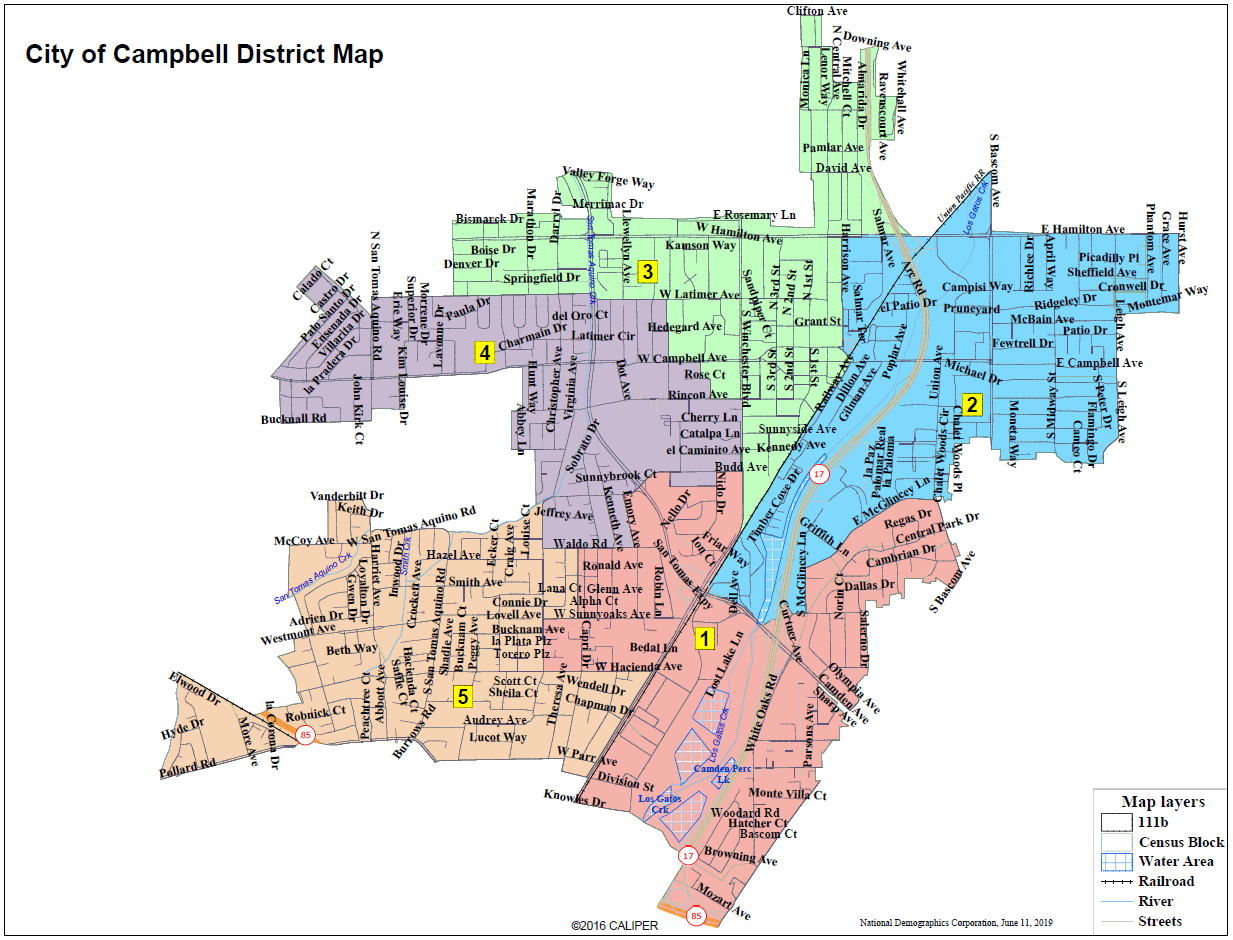 Why did the City of Campbell transition to district election?

According to the California Voting Rights Act (CVRA), it prohibits the use of an at-large election in political subdivisions if it would impair the ability of a protected class, as defined, to elect candidates of its choice or otherwise influence the outcome of an election. The CVRA provides that a voter who is a member of a protected class may bring an action in superior court to enforce the provisions of the CVRA, and, if the voter prevails in the case, he or she may be awarded reasonable litigation costs and attorney’s fees. The CVRA requires a court to implement appropriate remedies, including the imposition of district-based elections, that are tailored to remedy a violation of the act. In a lawsuit brought pursuant to the CVRA, a plaintiff who establishes a history of “racially polarized voting” under a city’s at-large election system can require a city to change to a district-based election system.

On December 3, 2018, the City received a letter from Shenkman and Hughes, PC alleging that the current at-large method of election violates the CVRA.

How were district boundaries created?

Below for is the specification of criteria to guide the establishment of electoral districts:

How were the composition of the districts decided?

Prior to receiving draft maps of the proposed boundaries for the districts, the City Council held two public hearings over a period of no more than 30 days, where the public was invited to provide input regarding the composition of the districts.

Draft maps were received, evaluated by National Demographics Corporation (NDC), and posted on the website on May 22, 2019, in compliance with California Elections Code 1001(a)(2).

How did the community participate in the decision-making process?

The community’s input in the development of the voting districts was very important to this process. The City Council held two public hearings before maps were developed to get community input on where district boundaries should be drawn. Two community workshops where also held to educate the public on the districting process, answer questions, and provide a demonstration of the tools available for the public to use to draw and submit their own maps.

The final map was adopted at the July 2, 2019, City Council meeting by a unanimous vote.

How often are the voting districts reviewed?

Districts will be reviewed following the 2020 Census, and every 10 years thereafter.